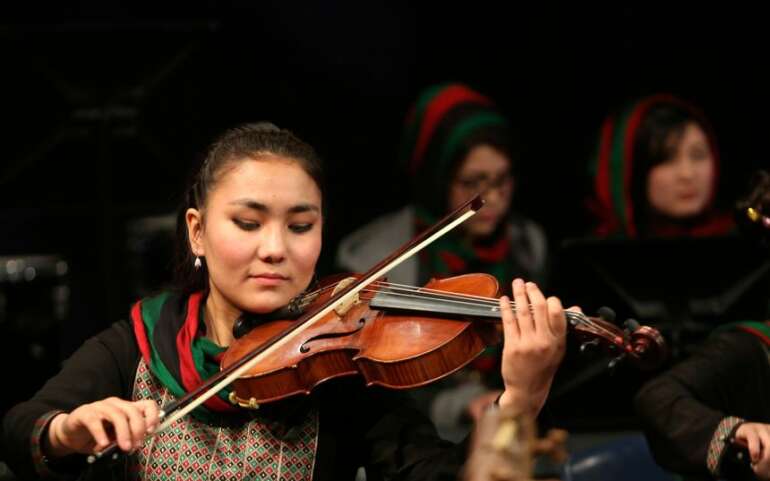 Members of an internationally renowned orchestra of Afghan women and girls remain stuck in Afghanistan after an attempt to get them out through Kabul’s airport in the last days of the U.S. war failed.

The ensemble, a symbol of Afghanistan’s cultural opening under the now-deposed U.S.-backed regime, was supported in its escape attempt by leading politicians and U.S. military figures and a team of ex-security and intelligence officials. But the plan was foiled because Taliban guards at the airport refused to wake a sleeping commander to greenlight their passage, according to several people involved. That has left dozens of the orchestra’s members in limbo and fearful for the future.

“I have already hidden my instruments,” said one of the musicians, now in hiding in Kabul. “We are endangered and vulnerable musicians. I have to leave Afghanistan because if I stay here my life will be under threat.”

The Taliban since coming to power have banned most music. The hard-line Islamist groupseverely restricted women’s rights during their previous rule. During their 20 years out of power, the Taliban threatened the school’s performers and sent a suicide bomber to one of its concerts, killing a German spectator. A group of Taliban killed a prominent singer in northern Baghlan province last month. The commander suspected of the murder has been arrested.

President Biden has defended the withdrawal from Afghanistan and deemed the evacuation a success. He has said the U.S. will hold the Taliban to its commitment to permit Afghans who want to leave to do so. On Thursday, 113 Americans, U.S. permanent residents and holders of other Western passports flew from Kabul on a Qatari jet.

But tens of thousands who wanted to flee have been unable, including those U.S. officials say are among the most vulnerable.

The 30-strong female orchestra, called Zohra, and the musicians of its parent school, the Afghanistan National Institute of Music, played traditional Afghan and Western classical music at some of the world’s most prominent venues.

Now, the institute’s musicians have quit playing music in their homes and are concealing their affiliation with the school, while their supporters are negotiating with the Taliban to resume instruction—or to secure their evacuation from Afghanistan.

“They miss the sound of their instruments,” said Ahmad Sarmast, the founder and director of the institute, who was in Australia when Kabul fell.

When the Taliban took Kabul on Aug. 15, Zohra’s supporters in the U.S. started lobbying Congress and the Biden administration to evacuate the musicians.

Mr. Schumer’s office agreed to sponsor visas for the musicians, these people said, while Mrs. Pelosi’s office contacted the departments of State and Defense in support of the group, according to a spokeswoman for the speaker. Representatives of Mr. Schumer didn’t respond to requests for comment.

A State Department spokeswoman said it “continues to appreciate Congress’ efforts to assist evacuees and will continue to communicate relevant updates.” The Defense Department didn’t respond to a request for comment.

The musicians’ backers in the U.S. secured agreements with a number of countries to help them escape. The government of Portugal was ready to fly them out, but that fell through when Portugal’s special forces fled Kabul after the Aug. 26 suicide bombing at the Kabul airport by the terror group ISIS-K, the group’s supporters said. The Portuguese Foreign Ministry didn’t respond to a request for comment.

Two days later, the group arranged seats on a British flight and the musicians, their teachers and relatives—285 people in all—were picked up in the city and boarded buses for the airport.

The buses waited two hours at an airport gate, but were told by U.S. troops that they hadn’t received instructions to let them through, the group’s supporters said. The buses turned around and headed for another gate. Rep. Cheney reached Gen. Mark Milley, chairman of the Joint Chiefs of Staff, according to people familiar with the effort.

He said that he was issuing instructions to let their bus in, while Sen. Cassidy contacted the U.S. Central Command, which runs U.S. military operations in the Middle East and was overseeing the evacuation effort, according to people involved in the effort. Meanwhile, Mr. Taylor and his team contacted the officers at the gates.

In the middle of the night, 15 hours after their initial departure, the buses made it within about 100 yards of a group of soldiers at an airport entrance. Mr. Taylor sent the U.S. troops a pin signaling the buses’ location on a digital map and told them the buses were marked with an “X” and Christmas tree signs.

Around 4 a.m. local time, four minutes after the American soldiers made a final attempt to negotiate safe passage with the Taliban, the U.S. military shut the airport gates, barring entry to the orchestra, thousands of other Afghans and some U.S. citizens, according to those involved.

“Un-frigging-believable. And unforgivable,” Rep. Cheney wrote in a text message to Mr. Taylor.

Mr. Sarmast, the institute’s founder, has been in talks with a Taliban official about resuming instruction. And those in the U.S. involved in the evacuation effort say they remain hopeful an arrangement can be made to get the musicians out.

But following the appointment of a government composed of the hard core of the Taliban leadership and devoid of women and religious minorities, Mr. Sarmast said “whatever little hope we had for music is fading away.”

For now, the priority is to “make sure [the pupils] are not harmed,” he said. “We are exploring ways to make sure their safety and security is respected.”