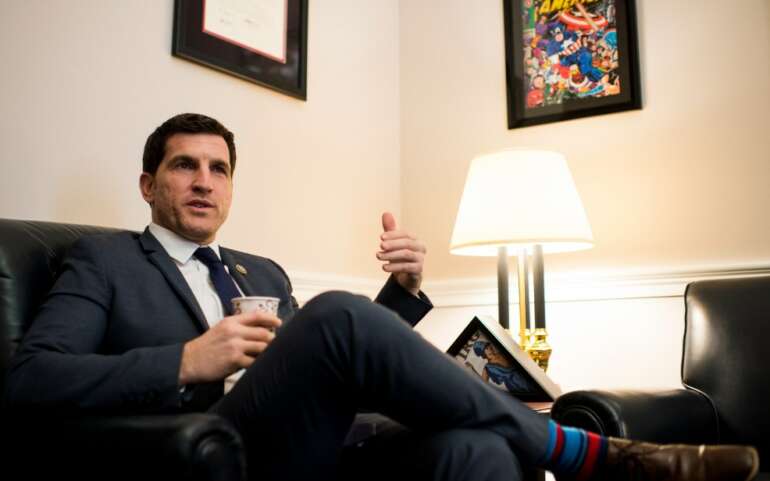 Freshman Rep. Scott Taylor, 37, a Virginia Republican, talks about being a Navy SEAL, getting a strange text in Yemen, and spending time with his son.

Q: What has surprised you about Congress so far?

A: I would say the biggest thing I didn’t expect, in a good way, was the caliber and quality of my class. Both Democrats and Republicans, they are highly intelligent, deeply committed to the country, people that want to get things done. I think that a lot of classes sort of reflect the mood of the country and my opinion of the mood of the country is, “Stop the gridlock, get some s— done.” I think that this class resembles that, and that was surprising, so I’m looking forward to working with a lot of them.
Q: With Ryan Zinke in the administration, you’re the only Navy SEAL in Congress. What unique perspective do you think that brings?
A: Yeah, he left me alone. From a background standpoint, it’s a very unique perspective. I spent years doing counterdrug stuff in South and Central America. I’m fluent in Spanish, which has helped us, of course, on CNN en Espanol and all these other networks. We can talk about the Russians, foreign policy, health care, and all that stuff in Spanish. Also, it makes me understand some of the issues we’ve had with drugs, counterdrugs and border issues. I spent years in the Middle East from a special warfare perspective. I also spent years in Yemen negotiating with armed tribesmen in the middle of the Arabian desert. So I spent years overseas, my education’s in international relations, so I guess from that perspective, there aren’t many members who have a similar perspective.
Q: You were almost put on a no-fly list, tell me about that.

A: I was in Yemen in the middle of the desert and I get a text on my Yemen phone saying, “Hey, turn your American phone off.” I was like, “Who is this?” It was someone in the SEAL team who was in the city at the time. Basically, the FBI was using Verizon and AT&T and they were looking at cell phone plans of Americans that were in Yemen — rightfully so, because they were looking for potential people that were Americans that turned to al-Qaida in the Arabian Peninsula. They were like, “You were about to be put on the no-fly list, they looked you up, they Googled you, they saw who you were and they came and talked to the SEALs that happened to be the active duty ones in the city who were like, “No, we know him, he’s good.”
Q: What do you like to do with your four-year-old son?

A: When I have him, we get into anything that we can. He’s all boy so he likes adventure, so we’re fishing, on horses, riding tractors, playing in the park, wrecking stuff. We just try to have a lot of fun. I teach him Spanish and we work on coding online. He picks it up really well. Everyone probably thinks their kid is really smart, but he seems to be pretty bright. We do stuff like that, that’s educational, but we also get in and get dirty and try to find adventures.
Q: There are a lot of people with military backgrounds in your freshman class. How’s that camaraderie working out?

A: It’s working out really well. I would say that, in general, military members and veterans are sort of independent-minded and certainly goal-oriented, so they want to get things done. Military members don’t tend to be overly partisan. If there’s some problem to be solved, they just say, “Hey, get your butt over here, let’s work together, let’s get it done, let’s figure out how we can do that.” That’s actually refreshing and I think having that mentality and that sort of service-above-self mentality is something that we gravitate towards each other because we know we have that commonality.